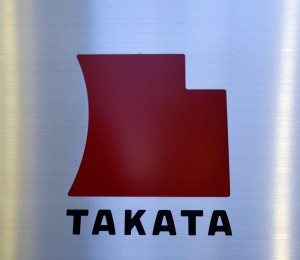 epa03657757 The logo of Japanese auto-parts supplier Takata Corp. is seen at the company Tokyo headquarters in Tokyo, Japan, 11 April 2013. Toyota Motor Corp, Nissan Motor Co, Honda Motor Co and Mazda Motor Corp said they are recalling a total of 3.39 million vehicles globally over airbag problems. The airbags related to the recall were supplied by Takata Corp, the world’s third-biggest airbag maker, the carmakers said. The companies said a malfunctioning inflator in the airbag may cause it to burst and spray metal shards, although no injuries or accidents have been reported. Toyota is recalling about 1.73 million vehicles including Corolla and Camry models worldwide, including 580,000 in North America, 490,000 in Europe and 320,000 in Japan. Honda is recalling about 1,135,000 vehicles such as the CR-V and Odyssey globally, including 686,067 units in North America and 276,000 in Japan. Nissan is calling back about 480,000 vehicles, while Mazda is recalling 49,847 vehicles. EPA/FRANCK ROBICHON +++(c) dpa – Bildfunk+++